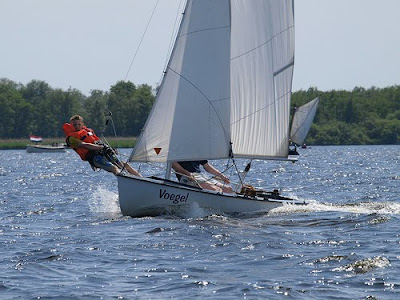 For many years my great passion was dinghy racing. I learned to sail in Bristol City Docks and then joined the Portishead Yacht and Sailing Club. The Bristol Channel is not the best bit of water to sail on. As the tide ebbs and flows, it creates one of the greatest tidal rises in the world. Consequently the strength of the tide limits sailing to just a brief hour or so either side of high water. So, in order to succeed in racing dinghies in these unfavourable conditions you not only have to understand the tides you also have to develop an affinity with the wind and quickly understand its fickle nature. One minute it is blasting at force 5 or 6 you need all your strength and knowledge just to stay afloat. The next minute it has swung round 90 degrees, fallen away to a dead calm and you are drifting backwards.

Riding a big blow on a broad reach can be breath-taking but if you fail to treat it with respect, you will find yourself in the water, all hopes of success dashed. It can be spooky too. You can be ghosting along on the merest breath of wind, the sails flapping like laundry on a washing line. Fifty yards away is the next boat, the skipper similarly using all his cunning to coax some movement out of the slightest zephyr. Then, out of nowhere, a boat trailing far behind, picks up the wind and sails straight between the two of you as if the gods had extended an invisible finger whilst the other boats sit there helpless. So, anyone who has spent any time messing about in boats, will recognise that the wind is a perfect metaphor for those things in life that one moment carry you towards victory and then in an instance, the other way towards disaster.

In traditional Buddhist terms, there are Eight Worldly Winds or rather, four pairs of Worldly Winds. One takes you where you wish to be and the other moves you the opposite direction. Some attract us whilst others repel us. The pairs are:

PRAISE & BLAME
We all respond well to praise. If someone appreciates what we do and gives us a pat on the back, we feel happy – that’s a normal reaction. However, if we hear praise too often we can become swollen headed and begin to expect praise as our due. This can lead to arrogance and false pride – and we all know what pride comes before.

I had been sailing for a year of two at the PYSC and sailed with Dave who had an Osprey. This was a fast trapeze-crewed boat, solid and well suited to the strong tides and big seas of the Bristol Channel. We had been getting on well and slowly moving up the fleet usually finishing in the top half dozen or so. One day we sailed a particularly well and crossed the line first. We had never won a race before and the spectators on the clubhouse balcony and the crowds on the shore were applauding as we approached the slipway and I swelled with pride. My helmsman called for a quick tack and I swiftly detached my harness clip, swung across the boat, ducked under the boom, sat out on the opposite side and leaned back into the harness as I acknowledged the tributes. Unfortunately I had forgotten to reconnect my harness and executed a perfect backwards summersault as I toppled out of the boat into the water. Without me there to take the bow and hold the boat steady, the hull ground onto the concrete slip. Praise quickly turned to blame as he accused me of being responsible for the big gouge in the bow.

SUCCESS AND FAILURE
There’s an old saying, “Be nice to the people you meet on the way up because you are going to meet them again on the way down.”

PLEASURE AND PAIN
Most of us learn this lesson the hard way. How many of us have childhood memories of wonderful days on the beach, running in and out of the sea, making sand castles, searching for crabs in rock pools? Many have further memories of the pain as we lay face down on the bed covered with a pink crust of calamine lotion, shivering from sunstroke.

FAME AND DISREPUTE
I had a close friend who was an actress. She had mostly been making a living from small walk-on parts in soaps and hospital dramas. Then she secured a leading role in a play running at the Savoy, her name was quite literally in lights. As a West End star she was invited to all the glittering showbiz parties and first night receptions. Visiting her in her dressing room one day I was surprised how calmly she had taken the sudden fame. She told me that it was all an illusion. She had been in the acting profession long enough to know that it could all disappear as quickly as it came. She refused to allow her head to be turned. When the production came to an end and she found herself ‘resting’ between jobs as a waitress at the Hard Rock Cafe, it came as no surprise. She returned to her relative obscurity without complaint or bitterness – she understood the cruel nature of celebrity. My admiration was boundless.

So, what can we do to cope with the worldly winds that blow us first one way and then the other? How can we prepare ourselves for the swings in fortune and misfortune? The answer is to develop equanimity.
The Seven Supports that lead to Equanimity:

1. Virtue or integrity
2. Faith or confidence
3. Mindfulness
4. A sense of well-being
5. Understanding or wisdom
6. Insight
7. Freedom or letting go.

VIRTUE/INTEGRETY/ETHICS
When we live and act ethically and with integrity, we become confident in our actions and words, leading to the equanimity of blamelessness. The ancient Buddhist texts speak of being able to go into any assembly of people and feel blameless.

FAITH/CONFIDENCE
The Pali word for faith, saddha, is also translated as conviction or confidence. If we have confidence in the Dharma and our engagement in a spiritual practice, then we are more likely to meet life’s challenges with equanimity.

MINDFULNESS
Meditation develops concentration and mindfulness. When the mind is focused and calm, we are less likely to be blown about by the worldly winds.

WELL BEING
By developing metta (loving kindness) towards ourselves as well as others we are more able to enjoy the world around us. Free from self doubt we are able to engage more fully with life and accept what we have without craving that which we have not.

UNDERSTANDING/WISDOM
Wisdom is an important factor in developing an accepting awareness; to be present for whatever is happening without the mind or heart contracting or resisting. We understand that our thoughts and impulses are often the result of external conditioning. Recognising this we learn to be more open and able to think for ourselves.

INSIGHT
One of the primary insights is the nature of impermanence. By recognising impermanence we see that things change so quickly we simply can’t hold onto anything for long. When you really engage with this on an emotional level the mind will let go of clinging. Letting go brings equanimity; the greater the letting go, the deeper the equanimity.

FREEDOM
Letting go of our conditioned responses and our reactive tendencies, brings freedom from bigotry, prejudice and discrimination. Being open to experience is liberating and leads to equanimity. As mindfulness becomes stronger, so does our equanimity. We see with greater independence and freedom. Equanimity becomes an inner strength that keeps us balanced.

When I lived in Spain, I crewed an 8 meter yacht designed for racing and day cruising. We had a crew of 6; five Englishmen and a Spanish skipper, Manuel. Manuel loved to race but was pretty hopeless at it. In spite of his passion he had little natural ability. We would spot wind-shifts and call out suggestions for changes of course to improve our position, but Manuel dithered. By the time he made a decision it would be too late and the advantage gone. Slowly we would slip back to our usual position at the tail end of the fleet. Eventually Manuel, realising that all was lost, would ask one of the others to take the helm whilst he went below. He would emerge moments later with a large tortilla, a roast chicken, bags of crisps, cool San Miguel beers and a giant flask of hot black coffee generously laced with brandy. We never won a single race in all the time I sailed with him, but we were the happiest, most contented crew in the entire Mediterranean.

There was a well-known scholar who practiced Buddhism and befriended a Chan Master. Thinking that he had made great strides in his spiritual practice, he wrote a poem and asked his attendant to deliver it to the Master who lived across the river. The Master opened the letter and read the short poem aloud:
"Unmoved by the eight worldly winds, *
Serenely, I sit on the purplish gold terrace."
A smile broke up on the lips of the Master. Picking up an ink brush, he scribbled the word "fart" across the letter and asked that it be delivered back to the scholar.
The scholar was upset and went across the river right away to reprimand the Master for being so rude. The Master laughed as he said, "You said you are no longer moved by the eight worldly winds and yet with just one 'fart', you ran across the river like a rat!"
Posted by Bahiya at 01:29