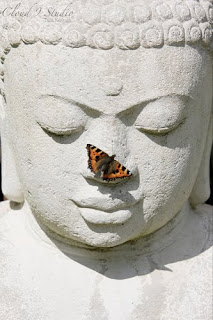 The concept of Pratitya Samutpada or dependent origination is common to all schools of Buddhism and is a fundamental cornerstone of the Buddha’s teaching. In short, it states that all phenomena arise together in a mutually interdependent web of cause and effect. A Wikipedia entry describes it as follows:

The Buddha described it more pragmatically:

They say that the best way to eat an elephant is a little bit at a time, so maybe we could start by nibbling at one tiny corner of this massive cardinal doctrine. The Buddha urged us to test his teachings in the light of our own experience and I have always taken this advice to heart. If I can see the truth of a concept represented in my own life and in the world around me, I find it much easier to understand. So here’s an example of something that seemed relatively insignificant at the time but because of dependant origination, it changed my past, my present and my future.

I joined the RAF in my late teens. I loved the life but was not too keen on my job as an RAF Policeman. I was due to be released at the end of my enlistment period but felt inclined to stay on if I could change my trade to something more interesting. The RAF had just introduced a new flying trade of Air Quarter Master. I met the criteria so I applied. I was then advised that all applicants must have a minimum of 9 years unexpired service. As I was at the point of being released, I would have to sign up for the full term. However, if I failed the selection process or did not complete the training, I would have to serve out the 9 years as a policeman. I quickly withdrew my application and was released a few weeks later.

I decided against returning to my home town of Ealing and settled in Bristol. Here I met new friends including Bob, a jazz musician and sandwich bar owner,

Meanwhile, unbeknown to me, another story was unfolding. Two teenage girls, Jan and Mandy, had become close friends at school in Bristol. They were now both working and decided to take a holiday together. It would be their first time abroad and they eagerly poured over the holiday brochures. They chose a reasonably priced 10 day holiday in Menorca in the Spanish Balearic Islands.

The adventure was everything they hoped it would be and Mandy had the bonus of a holiday romance with Jose, a handsome Spanish waiter. Unlike most holiday romances this one endured. Mandy and Jose continued to write to each other. Eventually Jose saved enough to fly to Bristol to find Mandy and seek employment. They married and returned to Menorca together where they started a family. Jan would fly out to visit them as often as she could. Eventually Jan also married but her husband wasn’t keen on foreign holidays, but she still kept in contact with Mandy and Jose as best she could.

Tragedy struck and Jan’s husband was killed in a motoring accident. Some years later she bumped into my friend Bob in a jazz club. They fell in love, married and had a honeymoon in Menorca with Mandy and Jose. Bob loved the island and couldn’t wait to move out and start a business there. Naturally I was keen to visit Bob and took my new partner Chrissie with me. She too was enchanted by the island and we agreed to sell up and emigrate there.

Chrissie’s son Will came with us, went to a local Spanish school and on to Art College. Years later, when Chrissie and I moved away from the island, he decided to stay behind. Today he works in one of the island’s big tourist attractions, Los Covas den Xoroi, a night club situated in caves set high in the side of a massive cliff face. His partner is pregnant and in a few months Chrissie and I will have a grandchild who will be part Spanish. I doubt that they will every wish to live in the UK so we will have a family line stretching far into the future and linked to this small Mediterranean island.

Had the RAF not imposed the 9 year rule, I would have stayed on as an Air Quarter Master, living an entirely different life flying around the world taking supplies to air bases. I would never have met Bob or known anything about Jan, Mandy or Jose. I would not have met my wife Chrissie or lived in Menorca. I would not have had a stepson called Will or a Spanish grandchild. My past, present and future turned on a simple decision to return to civilian life.

Through our own experience we are able to understand and appreciate the amazingly complex web of cause and effect that connects us all. Today it is considered to be new science and ‘the butterfly effect’ is often used as a metaphor. 2,500 years ago in Northern India a fully enlightened Buddha understood it all perfectly. He called it Pratītya Samutpāda.
Posted by Bahiya at 01:09