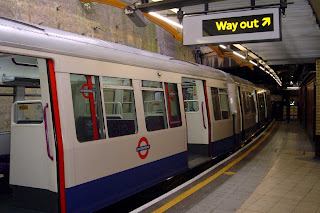 In the film Sliding Doors, Gwyneth Paltrow portrays two versions of a young New Yorker’s life. They are separated by the closing of the doors of a tube train. In one version she catches the train and her life is taken in a particular direction. In the other version the doors shut before she can board and her life is totally different.

It is the fact that our lives can turn on such seemingly insignificant events that excites me so much. No matter how we plan or structure our lives, they can suddenly alter in the blinking of an eye, for the better or for the worse. We may turn a corner and meet the person we are going to spend the rest of our lives with or fall down an unattended beer cellar and carry the scars forever. When we open our eyes each morning, we have no idea if the dawn is going to bring an encounter that will significantly alter the direction of our lives or if it is going to be just like any other day.

Some years ago I was a security surveyor working in London. One day, I was working in London’s West End when I received a pager message asking me to visit Group Sales Box Office, a company located down a side street off Haymarket: I was to ask for the Director, Gillian Guy.

I caught the lift to the second floor which opened into an incredibly busy office. Phones rang, telex machines chattered. People were ran back and forth carrying files and waving pieces of paper. I was led to the far corner where Gillian sat behind a desk shielded from the chaos by shoulder-high screens. She was on a transatlantic telephone call. No sooner had she put the receiver down than it rang again. I sat patiently until she finished and pressed the Do Not Disturb button.

She was an imposing figure. In her late 50’s, confident and authorative. Her accent was middle class and slightly theatrical. I needed to engage in a little small talk so that I could be sure of her attention, so I commented on the high stress environment and suggested it must be a very difficult to wind down at the end of the day.

She became quite animated. “Oh you wouldn’t believe it darling. It is so difficult. I’ve tried everything, alcohol, yoga, exercise. I am even thinking of trying meditation”.

At that time I was supporting the beginners’ drop-in class at the London Buddhist Centre, so I mentioned this. Gillian’s eyes lit up and she asked me when and where the classes took place. I explained that they were at a Buddhist centre in Bethnal Green and expected this would put her off. Not so. Gillian grabbed a Post-it note and scribbled down the details. I suggested that if she ever wished to come along, she should try the vegetarian restaurant next door as I usually ate there at 7.00 before the class started at 7.30 and would be pleased to introduce her. With that we moved on to discuss the security of the offices and when I left the building an hour later, I did not expect to see Gillian Guy again.

Several weeks later, I wandered into the Cherry Tree Vegetarian Café one evening for a bowl of soup and home made bread before entering the adjacent London Buddhist Centre for the beginner’s meditation class. Someone waved vigorously in my direction and it took a moment to recognise Gillian Guy, sitting in a corner wearing a genuine fur coat, oblivious to the fact that the vegetarian diners were looking daggers at her. We renewed our acquaintance and spent the evening at the class. Gillian took to meditation like a duck to water and we continued to meet regularly as she became a frequent visitor to the Centre.

Group Sales Box Office specialised in booking large blocks of theatre seats for visiting parties of tourists. In fact her company sold more West End theatre tickets than any other agency in London. Consequently, much of her spare time was taken up attending opening nights of plays and shows so she could assess their suitability for her groups.

She told me that her husband had been a senior manager with the Daily Telegraph but had died nearly two years previously. To compensate for the void left by his death she filled her spare time with the theatre and voluntary work as a part time magistrate. However, she didn’t like to go to the theatre unaccompanied and would invite friends and even ‘borrowed’ their husbands for a few hours to act as escorts. She asked if I liked the theatre and I replied that I liked it very much, although I didn’t go too often. Gillian asked if I would be prepared to escort her one evening and I said that it would be a great pleasure.

A few days later my pager instructed me to ring Gillian Guy.
“Are you free this evening” she enquired. I was.
“I don’t suppose you have a dinner jacket with you?” I assured her that it was not an essential part of a security surveyor’s equipment but I was wearing a dark blue suit.
“Could you buy a dickie-bow somewhere and then meet me at the Haymarket Theatre at 7.15? It’s the first night of a new musical”.

I was not too keen on musicals but it was a free night out and soon sported a criminally over-priced black bow tie. I hurried to the Haymarket. I turned the corner to see a heaving mass of people thronging around the Haymarket Theatre. There were flood lights, TV cameras and autograph hunters waving books. A fleet of sleek limousines queued at the curb-side waiting to discharge celebrity passengers. Policemen linked arms to hold back the crowds. And there, standing calmly on the other side of the police cordon, wearing her genuine fur coat, was Gillian Guy. She waved; instructed the police to let me through and quickly whisked me inside. She took a seat in the stalls bar whilst I elbowed aside Melvyn Bragg to order a couple of gin and tonics for the intermission. Gillian explained that this was the first night of Phantom of the Opera, a new musical by Andrew Lloyd-Webber and Tim Rice starring Michael Crawford who was a major star following his television success as Frank Spencer in Some Mothers Do ‘Ave ‘Em.

It was a glittering occasion and we were surrounded by well known faces. Gillian pushed through the crowds to speak to Stephen Fry. They obviously new each other well and she explained that they had once been neighbours when she lived on Clapham Common. We took our seats and the lights dimmed.

Back at the bar during the interval, Gillian asked me what I thought of it. Anxious not to reveal that musicals were not my thing, I praised the amazing sets. I was blithely unaware that I was witnessing the birth of a worldwide theatrical phenomenon; the most successful West End musical of all time.

When the curtain calls finally ended, we fought out way out into the fresh air once more.
“Come along darling, I’ve got a ticket to the Lloyd-Webber’s party at Limelight”. Gillian showed me the single gold edged invitation.
“I will walk you there and then I’ll go home” I said. I have had a truly incredible evening”
Gillian was having none of it. “Just stick close to me and we’ll be fine”

As we approached Limelight we could see a menacing team of bouncers guarding the door. I feared the worst but at that moment a number of taxis pulled up disgorging a crowd of dinner-jacketed men with their cocktail-dressed partners. We were surrounded on all sides. Cameras flashed, invitations were waved in the air. Somehow in the melee we were suddenly found ourselves inside and being offered chilled champagne by tall transvestites in fishnet stockings.

When we emerged at 2.00 in the morning, an argument was taking place on the pavement. Singer George Michael was being denied entry by bouncers because he had not got an invitation.

A throw-away remark about the need to unwind after a stressful had taken me to another world; one I would otherwise have only dreamed about. For the next three years I was to escort Gillian to every first night in both London and the provinces; attend every award ceremony and be invited to all the major theatrical parties.

Far more importantly, I forged a very special friendship that endures to this very day.
Posted by Bahiya at 06:57