This talk was given to a drop-in meditation class as part of a series on the Noble Eightfold Path.

The term Effort is a reminder that living a spiritual life is an active thing – it can’t be conducted from and armchair. I subscribe to the on-line Triratna Newsletter and almost every day another issue pops into my in tray. Frequently it reports on Order Members in far flung parts of the globe doing amazing things; they may be establishing a new Centre somewhere in India, building an extension to a Retreat Centre up a mountain in Spain or off on a pilgrimage to the sacred sites. When I consider the small part I play in helping to run our Tuesday Drop-in Class it seems hopelessly mundane in contrast. However, Perfect Effort is not necessarily about travelling around the world doing wonderful things, although thank goodness it is exactly that for many members of our worldwide Sangha. None the less, Buddhism does require that you make an effort to engage with the spiritual life so it is not just something you think about, but becomes something you live. It will come as no great surprise to know that there is a list – this one is known as The Four Exertions.
1. Preventing
2. Eradicating
3. Developing
4. Maintaining
They are fairly self evident. Preventing refers to making an effort to prevent unskilfull mental states from arising; we are on our guard to recognise anger, hatred, craving, envy, etc. Having become aware of the possibility of these mental states lurking in the wings, we take steps to Eradicate them by Developing more skilful mental states such as generosity, equanimity, loving kindness and so on and once we have done so, we attempt to Maintain these more positive states of mind. As the TV Meercat would say, “Simples”

If only it was. “The road to hell is paved with good intentions” as someone once said. It is so easy to be overcome by inertia. Take meditation. We know we enjoy it when we do it. We know we benefit from it. We know we shouldn’t allow anything to deflect us from our practice. But somehow there is often something more pressing, more demanding of our time and yet another day passes without sitting on the cushion. So it is with the Four Exertions. We know they make sense, we know we would benefit from practising them but somehow, something gets in the way. We browse Maplin’s and become gripped by desire for the latest techno-widget, we watch the news and become enraged by some news item about social injustice. Someone passes a negative comment about the way we do our job and we either become apoplectic with indignation or see our self esteem go down the drain in an instant. By the end of the day we are in a mental mess having failed to prevent, eradicate, develop or maintain skilful mental states of any kind.

Buddhists list six senses, sight, sound, touch, taste, smell - and mind. Unskilfull mental states can worm their way into us through any one of them. I have been a vegetarian for over 20 years but just the aroma of frying bacon causes lust, desire, greed and ultimately frustration to arise. Hearing someone screaming at their children in a supermarket could give rise to feelings of prejudice, anger and intolerance. Watching East Enders almost compels me to hurl my boots at the telly. Sometimes all my senses can work together in unison to create a full-on attack of unskilfull mental states; the feel of a heavy lead crystal glass, the clinking sound of ice cubes, the aroma of the world’s most noble spirit being uncorked, the golden colour as it emerges and that wonderful glugging sound. Then the first sip of that peaty, creamy, smooth, 8 year old single malt could cause me to forget restraint, ignore the Fifth Precept and get completely intoxicated. And of course, in my mind I could justify this by citing how hard I had been working and how stressed I had become. “I deserve this treat every now and then”.

So, we must be honest with ourselves, guard the gates of our senses, recognise unskilfull mental states for what they are, gently shutting them out by using our meditation practices to develop metta, mindfulness and focus. However, we should also be aware that, as with most things, we can take it all too far, becoming over zealous, self righteous, censorious, critical and intolerant. The other week I mentioned ‘sandwich-gate’ when someone attending a mother and toddler’s group here left a ham sandwich behind in the fridge. From the righteous indignation that followed its discovery you would think this building was a Mosque or Synagogue rather than a Buddhist Centre. The over-reaction was somewhat out of proportion. 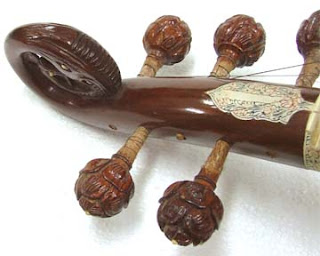 One day the Buddha observed an over zealous monk called Sona, who had practised Walking Meditation so vigorously that the soles of his feet had become blistered and bleeding. The Buddha bade him sit down and reminded him that before he became a devotee, he had lived a normal life and had played a musical instrument called a veena – a member of the lute family.
He asked Sona, “When the strings of your vina were too taut, was your veena in tune and playable?"
“No lord” replied Sona.
The Buddha continued, “When the strings of your veena were too loose, was your veena in tune and playable?"
Once again Sona replied, “No lord”.
“When the strings of your veena were neither too taut nor too loose, but tuned to be right on pitch, was your veena in tune and playable”.
Sona shook his head in agreement, “Yes lord”.
"In the same way, Sona, too much effort leads to restlessness whilst overly slack effort leads to laziness. Thus you should determine the right pitch for your effort, re-tune the pitch of your faculties, and then pick up your theme."