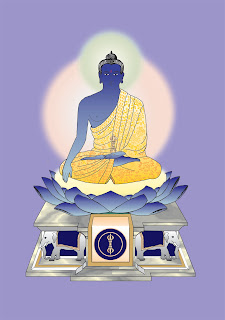 I recently gave this short talk on Akshobya Day describing my earliest encounter with this iconic figure:

Nearly five years ago I was invited to join an ordination retreat at Guhyaloka Retreat Centre high in the mountains above Alicante in Spain. I had been associated with the Friends of the Western Buddhist Order (now known as the Triratna Buddhist Order) for some 24 years. I had been attracted to Buddhism by its pragmatic, common sense approach and I found it answered questions that had been in my head for many years. In my enthusiasm I asked to be ordained into the Order. As time passed, any expectation I had of actually becoming an Order Member faded into the distance. So, when I received ‘the call’ nearly 20 years later, it took me very much by surprise and although I was excited by the prospect, I was more than a little unprepared.

With just days to go before we flew out from Bristol I was asked by one of the other guys who I had chosen for my yiddam. A yiddam is a Buddha or Bodhisatva who one finds inspirational and will play a central part in a visualisation practice – a meditation where you visualise his/her physical and spiritual attributes and aspire to follow them. You are invited to discuss this with the Preceptor conducting the ordination and unless he/she feels that your choice is significantly inappropriate, it is almost certain you will be receive the yiddam of your choice.

Knowing that I was going to be required to express a preference, I hastily reached for Meeting the Buddhas which rather fortunately, was written by Vessantara, the man who had agreed to ordain me. It is quite a thick book and there was not a lot of time so I rapidly scanned through the pages in the hope that something would leap out at me. Luckily, this is exactly what happened. Fortunately, the first of the Buddhas Vessantara described was Akshobya.

I learned that Akshobya was associated with the colour blue (in fact his body is actually glowing blue) and the water element. This immediately appealed as I have been so attracted to this colour, as a child my mother used to refer to me as “Little Boy Blue” because whenever I dressed myself, this was the colour I always chose.

I also love water. I was born within a short bicycle ride from the Thames at Kew and much of my early teens was spent cycling and picnicking on its riverside pathways. Latterly I have lived in Pill on the River Avon and Portishead on the Bristol Channel. More recently, my home was a narrowboat in Bristol City Docks and then a hill top cabin on the small island of Menorca, never more than 5 miles from the sea. Finally, for many years, my passion was dinghy racing.

In addition, I have always admired people who are able to remain calm in the face of adversity and have yearned to develop this trait in myself, unfortunately without much success.

So you can see that Akshobya ticked all the boxes. He is unshakable, immovable, steadfast. On his way to enlightenment he has conquered hatred and anger, transforming these negative emotions into ‘mirror wisdom’. So when I was asked who I would like as my yiddam I replied without hesitation – Akshobya, even though we had not really been introduced and I knew very little about him.

A few weeks later, high in the mountains above Alicante in Spain, I was given my new name, Bahiya, with a short explanation of why that name had been chosen for me. Then my yiddam was confirmed as Akshobya and for the first time I heard the Akshobia visualisation practice described. This is how Vessantra told it to me:

You are in the middle of an endless, clear blue sky. Nothing above or below you, just emptiness.

In the middle of this clear blue sky, slowly emerges a pale blue lotus. On the lotus, a bright white moon disk and on the moon disk is the symbol representing the bija-mantra HūM, deep blue in colour. The mantra slowly transforms into the figure of the Buddha Akshobya.

He sits on the bright white moon mat, on the blue lotus which is now supported by an elephant throne. His body is made of deep blue light. He is strongly built, wearing richly embroidered robes. He sits in the full lotus posture. With his right hand he makes the bhumisparsa mantra (earth touching); his left hand rests in his lap. On the palm of his left hand, standing upright, is a golden vajra. He has dark hair. His eyes are half open and his face has a smile of imperturbable compassion.

His head is surrounded by an aura of pale green light and his body by an aura of light red or pinkish light. In his heart is the deep blue symbol Hūm.

- which are also absorbed into your heart. The mantra is recited at least 108 times. Having done so you should sit a while in Samadhi (concentration). The mantra and rays of light dissolve back into the figure of Akshobya. The elephant throne, the moon mat and the blue lotus slowly dissolve. The figure of Akshobya begins to fade. All that is left is the dark blue symbol, Hūm. Gradually this too dissolves and you are once again alone in a vast, unending blue sky.

Over the years, Akshobya and I have come to know each other well and not for one moment have I regretted my hastily made choice.
Posted by Bahiya at 06:53