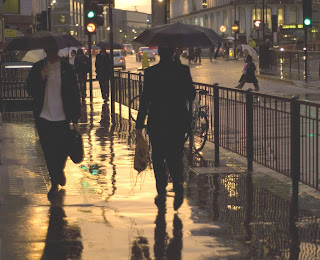 I was brought up in a home where God was never mentioned. My parents didn’t go to church or express any interest in religion. I was sent to Sunday school purely so they could enjoy a peaceful morning in bed with the papers. Later, in my early teens my parents separated and my mother had a mental breakdown. The usual teenage angst was added to by my distress at losing my father (he had moved 100 miles away) and my concerns for my mothers health. If I thought of God at all, it was to regard him as malevolent.

In 1981 I was in my mid 40’s and had been divorced twice and married three times. I was living in Bristol but travelling all over the country as National Sales Manger for a security company specialising in safes and vaults. One early autumn afternoon I was working in London SW1, somewhere near Victoria Station. I had two domestic security interviews to conduct. Having found a parking meter I fed it to the maximum before setting off for my first interview. It was over sooner than I expected and as it was unlikely that I would find another meter, I decided to walk to the next call. As I did so it began to rain. Without an umbrella or raincoat I was anxious to shelter until it passed and looked around for a pub or café. There was nothing but a long terrace of large Victorian houses. My pace quickened. Still no shelter. Then I saw a brass plaque above a short flight of stairs, “The Buddhist Society”. The door stood open and just inside I could see the entrance to a library with an “All Welcome” sign.

I entered the library and watched the continuing rain through the window as I pretended to browse the books. A small lady with oriental features approached me and asked if I needed assistance. Slightly embarrassed I asked if she had any leaflets on Buddhism, with the certain knowledge that all religious organisations always have leaflets and are just dying to give them away. She apologised, the only leaflet they had was one they give to children when they visit schools. “Perfect”, I lied, “I was looking for something for my children”.

The rain ceased, the second survey was conducted and I drove back up the M4 to my home just outside Bristol. That evening after supper, I took off my suit and discovered the leaflet in my inside pocket. It was Xeroxed on a single sheet of orange paper, printed both sides and folded to make 4 pages, A5. On the front was a line drawing of two children looking up at a statue of the Buddha. Inside, in language designed to be understood by 10 year olds, it briefly described the life of the Buddha, the Four Noble Truths and the Nobel Eightfold Path. As I read, a tingly feeling crept up my spine.

Without any formal religion I had developed my own personal ethical values over the years and considered them to be uniquely mine. As I read this children’s tract, I was struck by their similarity with Buddhist values. For much of my life I had been a bit of a loner, through circumstances rather than choice and the sudden feeling that I may share something with millions of other like-minded people around the world caused me a shiver of excitement.

The next day I rang the Buddhist Society to ask if they had any centres elsewhere, hoping there may be something in the West of England. “No, we don’t, but there is a Buddhist organisation based outside Bristol. Do you have transport?” I replied that I had a car so that was no problem.
“Do you know the village of Long Ashton?” Slightly stunned, I said that I actually lived in Long Ashton. “Well, do you know Western Road?” My voice went up an octave. “I live in Western Road!” They explained that there was a small community of Friends of the Western Buddhist Order in Western Road, gave me their number and suggested I contact them.

I rang the number and was answered by a man with a strong northern accent. I asked if they ever ran courses for people with absolutely no previous knowledge of Buddhism. “Yes mate, we run a couple of Beginners’ Weekends each year”. I requested he make a note of my number and give me a ring next time a course was planned. “No need mate, there’s one this weekend…”

Twenty-two years later, when a whole ocean of water had passed under my particular bridge, I was ordained into the Western Buddhist Order and given the name Bāhiya.
Posted by Bahiya at 00:43