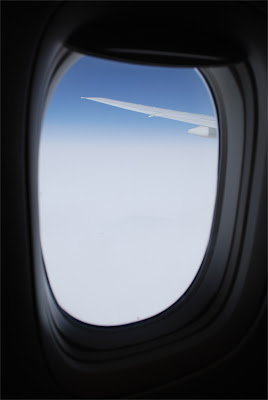 I related this story during a talk at the recent East Down Centre Beginner's Retreat in Devon (see below).

Some years ago, I was eking out a living as a water-colourist on the Mediterranean island of Menorca in the Spanish Balearics. I had been asked by my ex-employer to assist with a new project and was flying to the UK via Barcelona. As I sat in the departure lounge some passengers were transferring from an inbound Ibiza flight. One of them, a rangy middle-aged hippy, staggered under the influence of alcohol or drugs, as he searched vainly for a seat. He cussied and shouted at no one in particular. I had a sinking feeling that if he was allowed to board, he would end up sitting next to me.

The flight embarked and sure enough, he came tottering down the aisle towards me. To my intense relief he continued past me, disappearing to the far end of the cabin. Instead the empty seat next to me was taken by an elderly lady, short and rather dumpy, with a startlingly severe haircut and a shapeless, long-sleeved dress. I relaxed; at least I would be able to shut my eyes for a while during the 2 hour flight to Gatwick.

It soon became obvious that she was not going to be ignored and once airborne, eagerly engaged me in conversation. She asked if I had been on holiday in Spain and I explained that I was fortunate to live in Menorca and worked as an artist. Her face lit up as she twisted in her seat to look at me directly. She wanted to know what medium I worked in and I replied that I was a water-colourist. At this she issued a snort and became intensely animated.
“Watercolours are for women!” she exclaimed loudly, “Men should work in oils or acrylics”.
Now she was in full flow. “I use oils but I paint with my hands, I push the paint like this, and like this!” As demonstrated, waving her arms about in a dramatic manner, attracting glances from other passengers. I began to wonder if the Ibizan hippy may have been a better travelling companion.

As she became excited, her accent became an odd mix of something strongly Slavic combined with a slight tinge of Scots.

I asked her what subjects she painted. “I paint abstracts to express all the suffering I have seen in my life” She replied, her voice lowering. I enquired if she had a market for them and she explained that she lived in a retirement home for artistic Jews. They provided the canvasses and paint and sold her pictures to cover the cost of her accommodation. He voice became conspiratorial, “But I get up in the night when they are all asleep and paint pictures that I hide under my bed. Then I sell them privately”.

I wanted to know if she got good prices for her abstracts. “It’s better than writing books” she said with another snort. By now I couldn’t stop myself.
“You’ve written a book?”
“Yes” she replied with a dismissive wave of her hand.
“What about?”
“My years in the Russian gulag”
I sat up in my seat. “You were in the gulags?” I said incredulously.
“Yes, for many years,”
For the next hour she told me of her nightmare imprisonment in Stalin’s labour camps. Several times I felt my eye brim with tears. I could hardly breathe as her story unfolded.

I was desperate to know more but we were now being instructed to fasten our seat belts as we were starting our descent.
“Was the book published?”
“Oh yes, but after agents fees and public relations and marketing, I got nothing”.
She didn’t seem keen to continue discussion of her book but I pressed her.
“What was it called?”
“Long Journey Home”
“Is it still in print?”
“Oh yes”.
“What name did you write it under?”
“My name, Flora Leipman”.

The aircraft landed and Flora Leipman remained seated. “I am waiting for my wheel chair” she stated flatly. I wished her well and left the aircraft. As I waited at the baggage reclaim I heard a triumphant shout, “Goodbye Mr Watercolour”. Flora Leipman waved me farewell as she was pushed through the arrivals hall in her wheelchair.

At the weekend, I enquired at my local Waterstone's. I asked if they had heard of a book called, Lone Journey Home by a Flora Leipman. Yes they had. It had been on their best seller list but was sold out and they were waiting for the re-print to be delivered next week. I ordered a copy and collected it the following Tuesday. I urge you to find a used copy on Amazon - there are plenty there costing little more than the postage, I guarantee you will be moved.

In 1999 I read her obituary in the Independent.

In the 1930s Flora Leipman left the Glasgow of her childhood for Leningrad, expecting to help build a socialist paradise: instead, her whole family fell victim to Stalin's purges. Her strange, sad life was documented in a book by her, The Long Journey Home, which was also the subject of a BBC documentary....just before she died she explained: "Painting helps me forget . . . losing my girlhood, not having shoes, never having enough food, the rage, the waste of all our lives.”

I have learned that there is no such thing as an ‘ordinary’ person. No matter how ordinary a person may think they are or how ordinary they may appear to be at first sight, everyone, but everyone has a story to tell. Maybe not quite as chilling as Flora Leipman’s but an interesting tale nonetheless. All you need to do is listen.
Posted by Bahiya at 06:13