The Buddha's Teaching to Bahiya 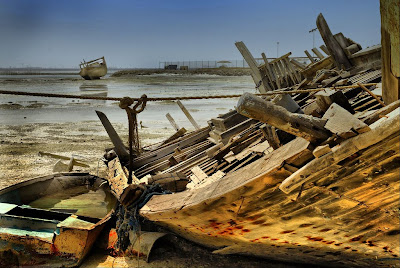 The tale of Bāhiya of the Bark Garment appears in one of the oldest of the Buddhist scriptures, the Udana, a rich collection of short stories of the Pali Canon.

Apparently, Bāhiya was a merchant who travelled to far off lands. He is said to have successfully crossed the great oceans seven times, but on his eighth voyage, he was shipwrecked and washed ashore naked.

He found himself on the beaches of Supparaka, a once great port on the west coast of India, just north of the present-day Mumbai. Covering his nakedness with flotsam from the beach, he tied a piece of bark around his waist. The villagers, seeing his eccentric dress, thought he must be a holy man and gave him alms; food, drink and shelter.

Time passed and Bāhiya became highly regarded amongst the local residents. They came to him for advice and spiritual teachings. Although not a monk, he became revered as a holy man and gathered a large number of followers, some of whom regarded him as an arahant (Pali - someone who has reached nirvana, the ultimate goal of the spiritual life where all suffering and all attachment ceases). After a while, Bahiya was beginning to believe in his own press, and wondered if he may actually have become an arahant.

In the traditional texts, it is claimed that in a previous life, Bāhiya had been one of a number of monks who had been so determined to achieve enlightenment through meditation, they had scaled a high mountain using a series of ladders. Once they reached the highest point, they threw their ladders down the mountain so there could be no return without achieving Buddhahood. As a result, most of them died. However, one of them somehow survived, and became a Non-returner.
He appeared to Bāhiya as a deva (Pali/Sanskrit - a supernatural being with special powers). He reprimanded him for his arrogance and told him that if he wanted to meet a real arahant, he should travel to Savatthi, the capital of Kosala in the far North where he would find Siddhartha Gautama, known to his followers as the Buddha.

This fired Bāhiya with such enthusiasm to receive a teaching from a real arahant, he set off immediately. India is a large continent and it was a long way from the west coast of Supparaka to the grove in Anathapindinka’s monastery in Savatthi where the Buddha and his followers were on their rainy season retreat (this was one of the Buddha’s favourite places. He used if for 20 years before eventually making it his permanent base). It is said that in his eagerness, Bāhiya only rested for one night.

When he eventually found Anathapindinka’s Monastery, the monks told him that the Buddha was not there, he was in the nearby town receiving alms. If he waited, the Buddha would return later in the day and grant him an audience. But Bāhiya became greatly concerned that something could happen to prevent him meeting the Buddha and receiving the teaching for which he had travelled so far. He decided not to wait but to follow him into town and seek him out.

Bāhiya eventually located the Buddha in the nearby village. He was standing very quietly, gracefully holding his alms bowl. Bāhiya approached, introduced himself and told the Buddha how he had travelled from way down south to receive a teaching from him. However, it was the Buddha’s practice to remain completely silent when seeking alms, so he did not reply. Bāhiya was so desperate for a teaching from a genuine arahant that he begged him once again. For a second time the Buddha remained silent. In desperation, Bāhiya flung himself at the Buddha’s feet, grasping his ankles, explaining that he must have a teaching right now. He said that no one knew what life had in store, he was afraid that something may happen to him or the Buddha and he may never have another chance to receive a personal teaching from a genuine arahant (a prophetic observation as it turns out).

It had become a practice, that if you asked the Buddha a question three times, he would always respond on the third time of asking. So, at this point, he turned to Bāhiya and gave him one of the shortest, and certainly the pithiest teachings in all of the Buddhist scriptures.

Bāhiya, you should train yourself thus: in the seen only the seen; in the heard only heard; in the sensed1 only the sensed; in the cognised only cognised.

Just this is the end of suffering.

Hearing this teaching, Bāhiya immediately recognised the deepest significance of the Buddha’s words and instantly gained insight. Thanking the Buddha profusely, he left him to continue his alms round. Unfortunately, a little later the same day, Bāhiya was involved in an accident with an enraged cow that was protecting its calf. He was gored so severely that he died from his wounds. When the Buddha returned to the monastery and learned of the sad fate that had befallen Bahiya, he instructed the monks to prepare his body and cremate him with all the respect and ceremony that is due to a true arahant. They should then build a stupa for his ashes and treat them with great reverence as befitting an enlightened person.

THE MEANING OF THE BUDDHA’S TEACHING TO BĀHIYA

This teaching is interpreted in many ways but on Free Buddhist Audio, you can hear Padmavajra’s talk ‘The Sound of Reality’. He tells the tale of Bāhiya of the Bark Garment and describing the meaning of the Buddha’s teaching he refers to “pure sensing” or “seeing without mental proliferation”.

Normally, when we sense something by seeing, hearing, smelling, tasting or perceiving, we almost immediately ‘claim’ it by stamping our interpretation on it, thereby button-holing our experience. This is rather like a tourist who can only experience what he is seeing through the lens of a camera. The experience can only be ‘real’ if he/she can take a picture of the experience home with them. The picture stakes their claim, proving that they have grasped the experience and, to use a photographic term, have ‘captured it’ on film. Consequently, the experience has now been divided into ‘self’ and ‘other’; into ‘grasper’ and ‘grasped’. The moment we claim an experience as ‘ours’ the essence of that moment is lost.

We have probably all encountered ‘unproliferated sensing’ or ‘pure awareness’ at some time or another although it may only have been for the briefest of moments. Walking past someone’s garden at dusk and we suddenly catch the scent of a flower. In that nano-second we respond with pure awareness. Our sense of smell engages and we have that “Aaaahhh” moment before we immediately move on to define the experience so that we can re-experience it again the next time.
Posted by Bahiya at 10:47