LIVING IN THE PRESENT MOMENT 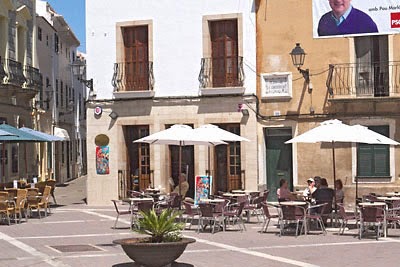 I have a connection with the beautiful Spanish island of Menorca.  Some years ago I quit my job and together with my partner, Chrissie, headed off in an old VW campervan towards Barcelona to catch a ferry to Menorca where we intended to try to earn a living as artists.  Once there we rented a tiny house on top of a hill in the middle of nowhere and sent for Chrissie’s 11 year old son to join us.

We struggled to make a living and were eventually invited to take charge of a restaurant and bar.  It seemed less precarious but was very hard work.  It became a success but after a few years we worn out and decided to move on, but Chrissie’s son was at studying at art college and chose to remain there.  He is now married and has two sons and we have frequently wondered if we could ever afford to go back to Menorca to live there once again.

On holiday last year, some friends offered us a small house at a peppercorn rent.  It was a home we were familiar with as our son had lived there for several years with his former partner.  It was too good to refuse and we began to plan our move from Somerset to the Mediterranean.  It was not a decision we took lightly as there were several important things to consider.  I am now well into my 70’s and my wife is 70 this year.  We have no private means, just State Pensions.  However, I provide consultancy services to a company in Kent who were happy to continue to the arrangement via the internet.

The cost of living in Menorca is moderately better with lower rent, lower community taxes and less heating bills, so we would be a little better off.  However, once we had moved everything lock, stock and barrel to the island, we began to reflect on wider issues.   At our age it is inevitable that we will eventually need medical attention.  It is also very likely that we will live out our final years here and we had been warned that the cost of cremation was very high – around 6,000 euros.  With my little consultancy we could afford to run a small car and even put some cash aside for an occasional visit to the UK to see family, but if it ceased, our sole reliance on a UK State Pension would not be sufficient.  We could never afford to move back and if one of us died, the other would be marooned here.  I would also miss my Buddhist friends.

However, the Dharma encourages us to live in the present moment.  The past has gone and cannot be changed and the future is unknown.  All we have is the here and now.  When a crisis arises we will somehow find a way to resolve it. That is not to say we should be reckless and not take steps to put aside resources as best we can, that is sensible.  But it makes no sense to fret about what may or may not happen.  We must enjoy our new life and live in the present moment; making new friends and learning to speak Spanish.  We have been here just a few weeks and
have already met some people who are keen to learn meditation and have asked if I would be interested in starting a small group.
Posted by Bahiya at 04:53