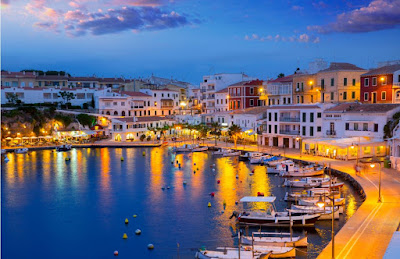 Four years ago my wife and I left the UK to live in Menorca.  The reason for us emigrating was threefold.  Firstly, financial.  Now retired on a very basic state pension, rent and council taxes would be much lower there - an important consideration.  Secondly, we had family in Menorca; my wife’s son’s family lived there with our two grandsons.  Finally, it was the year of the big floods in the Somerset levels.  Luckily we lived high on a hill, safe from the floods but for months and months we looked out over the saturated levels hating the grey, leaden skies and desperate for some sunshine.

We knew the island well, in fact some 20 years earlier we had lived there for a few years struggling to make a living as artists and interior decorators.  Having failed, we returned to the UK but continued to take our holidays there.  We owned a primitive ‘casita’ literally ‘small house’.  It had running water, flush toilet, a fair sized plot of land, but no electricity.  We couldn’t afford to install solar but we enjoyed summer evenings by candlelight.  We always looked forward to our annual holiday in Menorca visiting friends and family.  When we landed at Mahon airport we felt the stresses of day to day life in the UK immediately begin to fade away.  After a couple of weeks laying in a hammock or swimming in the sea, we were totally relaxed and ready to face the world once more.

But now we live here – our pensions converted to Euros and paid directly into our local bank.  At first everything was rosy.  Sterling was probably over valued as we were receiving over 1.40 to the pound and with a single client left over from my freelance days adding to our income, we felt that we had made the right choice.

Then came the referendum.  Even before the results were known, sterling was already on the move downwards and it continues.  Now not far short of one for one, we have definitely felt the pinch.  My stepson lost his job with a local nightclub and unable to find alternative work, took his wife and children back to the UK where work was plentiful.  We missed them terribly and this combined with our diminishing income began to create stress.  In the past we would counter this with a short holiday in Menorca – but now we lived here and there was no escape.

This reminded me of the piece I wrote on this blog a few years ago about the Wordly Winds I read it through again and remembered how much I enjoyed leading classes at the Bristol Buddhist Centre and also the pleasure in writing these notes afterwards.  So I have decided to revive it – maybe not writing as regularly as I did when I lived in the UK, but just now and then.  Quite what I will write about and who I will write it for, I am not sure.

(pictured is Calas Fons at Es Castell)
Posted by Bahiya at 06:01