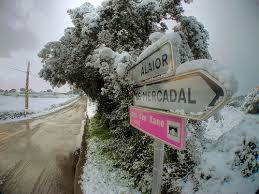 There’s a widely held misconception that we don’t experience the four seasons here in the Balearic Islands.  The transitions may be very different in appearance to those experienced in the UK, but we still enjoy spring, summer, autumn and winter.

Spring is notable for its profusion of wild flowers.  No daffodils or bluebells but spring is around the corner when there is a sudden explosion of bright yellow flowers that seem to happen overnight.  They pop up everywhere, every nook and cranny, every crack in a wall or pavement will be filled with them.  When the sun bounces off the carpet of yellow blooms it is dazzling and you have to look away.  Then just as suddenly they are gone to be followed by oxide daisies and a proliferation of wild orchids including the fascinating bee orchid, mimicking female bees to trick males into mating and thereby pollinate them.

This year however, spring suddenly became summer without warning.  Half way through May we were enjoying the warmth of early season’s sunshine when suddenly temperatures soared into the low 30’s, and it stayed that way all through June with high levels of humidity.  June became July heralding killer temperatures way off the scale, reaching the low 40’s in several places.
We took showers several times a day but it was futile, just toweling off was enough to get the sweat flowing again and sleep was almost impossible.

August was unbearably hot and humid, we could hardly remember the last time it rained. Then on the very last day of the month the rain came.  Temperatures plummeted as the skies clouded over and at last the garden hose was redundant.

Yesterday the thunder rumbled and skies turned slate grey.  Strong winds heralded more rain and it   I remembered many years ago when we were running a country bar/restaurant in August and at 6.30 in the morning a storm broke the drought.  In an instant the gutters were overflowing with rain, water streaming off the roof to create a waterfall .  I leapt out of bed, grabbed a bar of soap and stood naked under the gushing water, filling the patio with suds. I had never felt so alive.
was delicious.

This morning the grey skies are gone as have all the puddles.  The breeze is still quite perky but the temperature was up in the low teens when I exercised our dog at 8.00 but quickly climbing to a manageable 28⁰ by midday.  The humidity has gone and the air is crisp.  Hopefully, in spite of this sudden shift from Summer to Autumn, we will have a few weeks of this wonderful weather before the winter chill arrives.
Posted by Bahiya at 01:18