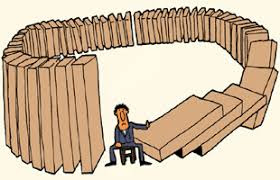 Firstly, it is important to establish that karma is not a form of punishment meted out by some powerful deity, neither is it fate or destiny.  Our actions are often likened to seeds that are planted in the present but harvested in the future.  This future may be just minutes away or it may be many years before our actions mature into consequences.  However, this may be a little simplistic.

Karma is not a general law of causation but it is the way our deliberate actions shape our relationships with other people and affect the world we live in.  It is our intention, the deliberate wilful action that creates Karma.

So in this case, it seems undeniable that Harvey Weinstein’s actions were aimed deliberately at satisfying his sexual urges with little or no consideration to how other parties were affected or damaged by them.  But what of all those who, because of the power wielded by him, were coerced into being complicit or remaining silent?

These were deliberate actions albeit taken under duress.  They could have spoken out but chose not to out of fear of reprisals or damage to their own careers.  It could be that their actions were partially responsible for fostering the continued belief among some that sexual harassment was acceptable.
Posted by Bahiya at 00:52